Gov Yahaya Bello for President of Nigeria?
By Yushau A. Shuaib

“Eh… My Oga!”, he exclaimed, with surprise written on his face.

I quickly glanced backward to see who the call was meant for.

Surprisingly, other guests, mostly editors and online publishers, were smiling and laughing.

Through my face mask, I returned a smile and exchanged a COVID-19 greeting of an elbow bump, rather than a handshake or an embrace.

A week prior to the face-to-face encounter with the governor, I had had an extensive conversation with the Auditor General for Local Governments in Kogi State, Mr. Usman Ododo Ahmed, who had highly extolled the success of Governor Yahaya Bello in securing and stabilising the State. Predictably, my guest had no prior inkling that I have known the governor since he was a National Youth Service Corps (NYSC) member with the Revenue Mobilisation Allocation And Fiscal Commission (RMAFC) in the early 2000s, where I was then the Head of Media and Public Relations.

The Chairman of RMAFC at the time, the now late Engineer Hamman Tukur had sought the posting of young, vibrant and knowledgeable graduates who could assist the Commission in its constitutional mandate, especially in terms of data analyses on economic issues.

A renowned North-Central politician and industrialist, Dr. Faruk Abdul-Aziz, who was a board member of the Commission, was the one who had recommended Yahaya Bello, among the corps members who were selected to serve in RMFAC.

For those conversant with the Nigerian economy during that period, RMAFC, through its PR Division that I directed, had created massive awareness campaigns that equally encouraged public participation on issues bordering on public finance, such as the monetisation policy of government, revenue generation, federal allocations, and the general fiscal efficiency of the country.

As an Accountancy graduate of the Ahmadu Bello University (ABU), Zaria, Yahaya Bello was among the Youth Corps members whose contributions in analysing financial data and other statistics, were invaluable in informing the public about fiscal issues properly. In fact, most times then, we worked till late into the night with the Chairman on sensitive assignments.

At that time, the Commission was central to the execution of the monetisation policy of government, pertaining to the remuneration of public officers; resolution of the crises over disputed oil wells among States in the Niger Delta; proposition of a fair and just revenue allocation formula across government; recommendation of economic diversification policies to the federal authorities; and reconciliation of the external debts of the federal and state governments, while equally suggesting better measures of managing those debts. It also served as a forerunner in the campaigns for financial independence of the tiers and arms of government, whilst creating awareness on the need for transparency in public finance.

Because of the open-door policy of the Tukur era, young staff members had opportunities to engage members of the board and management of RMFAC in vigorous and cordial debates on public issues, on one-on-one basis. Meetings at the Commission were the reflection of a market place of ideas, where the intellectual climate was such that it even encouraged National Youth Corp members to make contributions to issues, which they took up through factual analyses, employing historical perspectives, alongside appeals to legal and constitutional provisions, devoid of political undertones and counterfactual anecdotes. My office, then, was one of the vibrant hubs for the youth corp members, including Yahaya Bello.

It was therefore not surprising that outstanding corps members, who excelled in their contributions to the Commission’s mandate, were offered automatic employments at the end of their mandatory one-year service to the country. In this regard, some like Husseini Sani Kagara and Hawwah Dahiru, who served in my office, and Yahaya Bello, who served in the Allocation Department, were among those offered automatic employment.

While Kagara later transferred to the Central Bank of Nigeria and Hawwah (who won the NYSC Award) went into private business, Yahaya Bello stayed on and received rapid promotions for his efforts, which saw him serve in different capacities in the Commission, before also leaving the public service for other private endeavours.

I recall the media intervention that I had spearheaded in opposition to Dr. Dora Akunyili’s National Agency for Food and Drug Administration and Control (NAFDAC) over the closure of Biomedical Services, a pharmaceutical company owned Dr. Faruk Abdulazeez, due to its production of certain Travenous Fluids in 2002. At that time, some media specialists, including the former Chairman of the Nigerian Union of Journalists (NUJ), Smart Adeyemi, had pointedly advised Dr. Abdulazeez not to engage Dr. Akunyili and NAFDAC in a media war because of her tremendous goodwill with the press. Yet, Yahaya Bello and one Abdul Bello (the Personal Assistant to Dr. Faruk then), who is now the Chairman of the All Progressives Congress (APC) in Kogi State, were highly concerned about the plight of their benefactor and urged me to continue with and give greater momentum to the campaign. A press conference was eventually held to appeal to NAFDAC to reassess its clamp down on the products of Biomedical Services. The case was thereafter revisited, and in finding out that it had acted unfairly towards the company, NAFDAC subsequently reopened Biomedical Services. 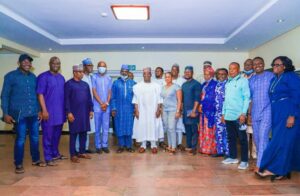 I had never met Yahaya Bello since I left RMAFC in 2005, even though I also read about him, like most people do since he set out on his political path and finally became a governor. However, the opportunity of engaging with his political trajectory, and particularly at this juncture when there is a movement towards his run for the Nigerian presidency, came when I received an invitation to join some editors for a media chat.

I had intended to bombard him with a lot of questions, but he disarmed me by referring to me as ‘Oga’ and jokingly reminded me of ‘imported biscuits’ I had shared with them in my office. I was not his ‘Oga’ but only his colleague at RMAFC, where I was just another senior civil servant.

However, during the ensuing question-and-answer session, he was able to address some of the issues I had intended to engage him on. The session was moderated by the Secretary to the State Government, Mrs. Dr. Ayoade Folashade Arike, who was recommended for the position by Governor Bello’s now political arc-rival, Senator Dino Melayo, in 2015

On the COVID-19 vaccine, the governor pointed out that he did not need to take the vaccine because he is fully healthy and not in the danger of any health concern. He added that Kogi State, which he governs, is faced with several other health challenges that are more serious than COVID-19, which are being successfully tackled and resolved, including outbreaks of Lassa Fever and Yellow Fever, without any noise being made about these, unlike the hysteria surrounding COVID-19, which is considered as largely contrived.

Pertaining to his relationship with former Minister of Aviation, Chief Femi Fani-Kayode, who is a controversial politician, Yahaya Bello explained that he and the Peoples Democratic Party (PDP) chieftain are brothers who are mainly interested in the peace and progress of Nigeria, despite what might be their political divides.

He noted that Fani-Kayode had joined him in brokering peace between the Amalgamated Union of Traders and our other aggrieved persons, which led to the aversion of a North/South ‘war’ during the recent food blockade that threatened peaceful and progressive co-existence in the country.

In terms of the 2023 presidential primaries, Governor Yahaya Bello dispelled rumours about the existence of a zoning clause in the constitution of the All Progressives Congress (APC), while pleading with leaders of the party to allow for unrestricted contest during the primaries, which should be open to all eligible party members nationwide.

He nevertheless, expressed confidence that he would defeat any APC presidential aspirant if there is a level playing field at the primaries.

While calling on politicians to think of the survival of Nigeria first in all they do, he pointed out that if it is the will of God, he would surely become the president of Nigeria in 2023.

Could there be the possibility of a repeat of the Kogi gubernatorial victory of 2015 in the forthcoming presidential election in 2023? As much as it is emergent upon time to reveal what it has in stock for all, yet the future lies in wait only for the brave and undeterred.