Home » Due Process: Between Security Votes and Oil Contracts

While the majority of top officers appointed into NNPC by Kachikwu during his days as the GMD are from Southern Nigeria, Baru is alleged to have done the same by ensuring that his recent reorganisation of the management staff of the oil corporation favours the North. 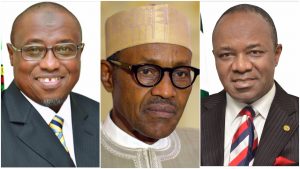 Due Process: Between Security Votes and Oil Contracts
By Yushau A. Shuaib

Successive administrations in Nigeria, including the current one claim to promote transparency and accountability by following due process in financial dealings and public procurements. Nevertheless, governments at all levels avoid strict compliance with standard norms and regulations when actions are taken for both economic and political exigencies.

The confusion and power struggle between the then President Olusegun Obasanjo and erstwhile Vice President Atiku Abubakar, though political, were fuelled on allegations of non-compliance to due process over activities of agencies under the purview of Atiku, including PTDF. Court cases afterwards merely favoured the former Vice President.

Every tier of government engages in financial dealing outside the legal requirement using different nomenclatures and suspicious regulations to justify the indiscretions. For instance, a security vote is one of the conduit pipes used by various top public officers to avoid being accountable to anyone. Even the Public Procurement law provides exceptions to disclosures on sensitive security issues and requirements.

During the previous administration, not only President Goodluck Jonathan, but most governors used security votes extensively for security and other various activities including funding of political campaigns.

In the recently published book “An Encounter with the Spymaster,” this writer disclosed categorically that “the movement of large cash in local and foreign currencies by the two major political parties, APC and PDP, to win primaries and general elections in 2015 were discovered by security and anti-corruption agencies but tactically suppressed to avoid embarrassing outcries that could tarnish the electoral processes and rubbish the image of the country. Few senior journalists, especially some members of Faculty of Bureau Chiefs and Editors where a highly respected investigative Editor, Yusuf Alli is the Dean, are aware of some of the details and culpability of the parties.”

Therefore, at the national level, one of the major institutions that have been indirectly involved in funding sensitive and classified operations whether for security or other exigencies is the Nigeria National Petroleum Corporation (NNPC). The media trial and court cases against the former Minister of Petroleum, Diezani Alison-Madueke on allegations levelled against her by the Economic and Financial Crimes Commission (EFCC) are clear examples.

The fear of past incident recently reared its ugly head as the current Petroleum Minister of State, Dr. Emmanuel Ibe Kachikwu in a memo leaked to the media, informed President Muhammadu Buhari that the Group Managing Director (GMD) of NNPC, Mr Maikanti Baru, was disrespectful to him. He also allegedly accused the NNPC boss of awarding contracts worth over $25bn without the approval of the board of the corporation.

The contents of the memo are not only embarrassing but damning because it would easily rubbish the integrity of the current administration of President Muhammadu Buhari and its hyped anti-corruption campaigns.

While the two men on the brawl, Kachikwu and Baru are first class materials in all sense from their academic accomplishments as well as their experiences in the oil sector, there seem to be missing narratives on the altercation.

Apart from the allegations of insubordination, lopsided appointments and awards of contracts without the consent of NNPC board by Dr. Baru, there are also documents seen by Economic Confidential indicating that the Act setting up the Corporation, statutorily mandates the GMD to report directly to the Substantive Minister of Petroleum Resources, which in this case, is President Muhammadu Buhari.

Since the emergence of President Buhari, appointments of top Group Executive Directors (GED) were made by Kachikwu. An online platform, DailyNigerian, reports that “Among the seven Chief Operating Officers (COO/GEDs) currently working under Baru, five were actually appointed by Dr Kachikwu, three of whom came along with him from the International Oil Companies (IOCs).”

Mr Kachikwu actually brought in Babatunde Adeniran (COO Ventures), Anibor Kragha (COO Refineries) and Henry Ikem-Obih (COO Downstream) from outside while Isa Inuwa (COO Corporate Services) and Bello Rabiu were sourced from within. Chidi Momah, who is still Secretary of the Corporation, was also hired by Mr Kachikwu.

While the majority of top officers appointed into NNPC by Kachikwu during his days as the GMD are from Southern Nigeria, Baru is alleged to have done the same by ensuring that his recent reorganisation of the management staff of the oil corporation favours the North.

When this writer wrote an article on a disagreement between Kachikwu and current Minister of Transport, Rotimi Amaechi (Link: https://goo.gl/V1cMjM) over projects in NigerDelta, the Petroleum Minister of State should have since realised that in an intense political clime, one must tread consciously and cautiously. Attempts to crucify Maikanti Baru over some alleged decisions in NNPC may not likely fly because it would seem to be an attack against the Presidency. Media reports so far have indicated that Dr. Baru is reputed to have unfettered access to the substantive Petroleum Minister who is President and commander in chief than most cabinet members. It could, therefore, be extremely difficult for the GMD NNPC to have taken any unilateral decision without the consent and authorization from the highest office in the land. Whether the actions taken are right or wrong only the court can determine.

Meanwhile, in an exigency, due process can be ignored to justify the Machiavellian principle of “the ends justify the means” on security votes and oil contracts for national interests.