The reality on the ground is that Boko Haram menace is not only seen as Borno’s ‘wahala‘ but a tragedy that affects Nigeria and its neighbours. 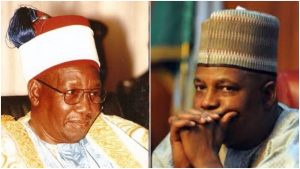 “Fear a tumult which will affect those who caused it as well as the innocent ones…”
Quran Chapter Anfal 8:25

I have deliberately quoted the above verse from the Quran, the Holy Book of Islam since the majority of Borno People are Muslims without ignoring the fact that there are other communities and towns within the state that are predominantly Non-Muslims.

As a Nigerian like most of you, I express my deepest sympathy and great empathy with Governor Kassim Shettima, the Shehu of Bornu, Abubakar Ibn Umar Garbai El-Kanemi and the resilient people of Borno State over the seeming unabated Boko Haram insurgency.

It is rather regrettable that when the military had prepared for a massive onslaught with a declared 40 days ultimatum for a major arrest, Nigerian troops escorting oil prospectors and geologists were ambushed by the terrorists in the state. While some of the victims including soldiers, Civilian JTF Volunteers, and staff from the Nigerian National Petroleum Corporation (NNPC) and the University of Maiduguri (UNIMAID) were massacred, few others were paraded in a video to attract public outrage and compel further negotiations with the terrorists (Link: https://goo.gl/ky5hyD.)

Rather than engaging in frivolous conspiracy theories over the reasons and those behind the Boko Haram crisis, which engulfed some states in Nigeria some years ago, it is necessary to point out that it started in Borno with the involvement of the people of the state and with supports, if not connivance, with influential people in the state.

The Army spokesperson, Brigadier General Sani Kukasheka Usman recently issued a statement that parents were donating their children for suicide bombings that are now rampant in Borno State (Link: https://goo.gl/vv49d6). That was not the first of such warnings. In fact, on September 25, 2015, the Nigerian Army had raised an alarm over plans by “some highly-placed individuals” in the same state to sabotage military operations in the region. The Military even issued a strongly worded warning saying that “the unscrupulous individuals and their cohorts were determined to reverse the gains made and scuttle military efforts of achieving the Presidential directive to defeat Boko Haram terrorists within 3 months.” The statement further disclosed that the elites “were enlisting the services of some Non-Governmental Organizations in the grand design.” (Link: https://goo.gl/qErv5V)

Since the recovery of many towns and villages by Nigerian troops from Boko Haram in Adamawa and Yobe, the people of these two states and elsewhere have cooperated with the security agencies. Recent statements from the Department of State Services (DSS) headed by a Katsina man, Lawal Musa Daura, have shown how useful information provided by the people in other states, and intelligence sharing by security agencies, curtailed terrorism in Gombe, Sokoto, Kaduna, Kano, Niger, Kogi Taraba, Nasarawa, Plateau and the even Lagos States with arrests of many suspects. (Link: https://goo.gl/6UePPz)

Surprisingly, one of the finest strategies adopted by President Muhammadu Buhari, a veteran himself, was the appointments of people from Borno into highly strategic positions in the administration with the hope that the deliberate policy would assist in intelligence gathering to end the Boko Haram insurgency and address the plight of the victims.

Some of the individuals from Borno holding influential positions at the national level include the Chief of Staff to the President, Abba Kyari; the National Security Adviser, General Babagana Monguno; the Chief of Army Staff, Lt General Yusuf Buratai and even the renowned jailer of corrupt suspects and the boss of the Economic and Financial Crimes Commission (EFCC), Ibrahim Magu among others.

We must not ignore the commitment and relentless efforts of Governor Shettima, who is pumping large chunk of state’s share from the Federation Account to address the security challenges, the plight of Internally Displaced Persons (IDPs) as well as the rehabilitation and reconstruction of infrastructure destroyed by the terrorists in the state (Link: https://goo.gl/P6n5XH).

It is rather baffling that with the incessant Boko Haram ambush, suicide bombings and their propaganda videos, the suspects are not detected early enough before wrecking havocs in soft targets as if they drop from the moon.

Apart from the loss of lives and displacements of people, the economic impact of Boko Haram activities in Borno is estimated at $5.9 billion (N1.9tr) according to the Army. Representing the Chief of Army Staff at the first annual conference of Guild of Corporate Online Publishers, Major General Peter Dauke said that Borno had about 400,000 houses damaged by Boko Haram Link: https://goo.gl/Mj9Sg9)

The latest Annual States Viability Index (ASVI), published by the Economic Confidential, an economic intelligence magazine, indicated that Borno State cannot survive on its internally generated revenue (IGR) without the free flow of revenue from the Federation Account and supports from other states like the recent donations by Northern governors (https://goo.gl/ZugR6M). Yet, the state possesses significant potentials in agriculture, industry and other resources including a landmass and lake that provide huge economic advantages for farming, fishing, husbandry, forestry and tourism among others.

Apart from its potentials for oil explorations, Borno has billionaires with huge investments outside the state. It is also blessed with highly educated and skilled individuals that could contribute to the economic development of the state.

More worrisome is the ever-increasing number of local and International Non-Governmental Organisations (NGOs) in the state whose impacts are not felt in the productive sector by facilitating job opportunities for the people. The NGOs merely engage in multi-million dollars advocacy programmes and relief distributions of mostly foreign produced items to the beggarly IDPs.

With the complex irony, could some groups and individuals be profiting from this seeming and booming terrorism industry?

It is high time that Borno people, especially the political elites, public office holders, traditional rulers, community leaders and youth groups to do more in providing the necessary information and intelligence for security agencies towards addressing the insecurity, ignorance, poverty and other malaise in the state. The reality on the ground is that Boko Haram menace is not only seen as Borno’s ‘wahala‘ but a tragedy that affects Nigeria and its neighbours.