Home » Between Nigerian Igbos and Biafran Agitators – A Northerner’s Perspective

While it may be justifiable to unleash a ferocious dog against a neighbour’s untamed mad dog, we should deploy common sense through dialogue to resolve the contentious issues of our nationhood. 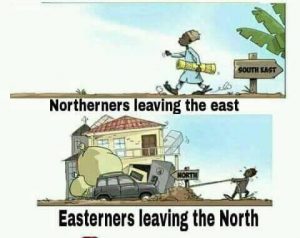 Between Nigerian Igbos and Biafran Agitators – A Northerner’s Perspective
By Yushau A. Shuaib

The sweet memory of my youth service year in an Igboland of Asaba, Delta State in the 90s, is what I have continued to relish whenever a discourse on tribalism, sectionalism and the likes are on the front burner in my beloved country, Nigeria. As non-indigenes, especially young Northerners, we were well-received, accommodated and accorded respect and dignity. In fact, we freely walked into the Palace of the Paramount ruler, the Asagba of Asaba, Professor Chike Edozien for supports and guidance whenever the need arose.

Since then, I have had a proper perspective and understanding of the Ndigbo whom I have as friends. In this tension-soaked period where various sectional groups issue reckless and unguarded threats, it is necessary to further distinguish between a peace-loving Nigerian Igbo from a Secessionist Biafran agitator.

The Ndigbo, as I know them, are spread across every nook and cranny of Nigeria. The Igbo speaks local dialects and respects the culture of the host communities. He believes every part of Nigeria is a home away from home and adopted same as the place of residence. Experience has shown that if you go to any community and you cannot find an Igbo person there, your best bet is to leave that town immediately. Any city without an Igbo person is not business-like. On the other hand, a Biafran agitator is not exposed to other parts of Nigeria besides the Igboland and might have grown in the diaspora where he only learns the distorted history of Nigeria from myopic and eccentric points of views. The agitator hates other Nigerians and possibly believes in violent confrontation towards the actualization of his dream of the Republic of Biafra.

Meanwhile, the successes of an Igbo entrepreneur is more visible outside the shores of Igboland with enormous investments in hospitality, housing estates, spare parts, automobiles and manufacturing industries among others in different regions of the country. However, the business enterprise of a Biafran agitator is restricted within his ‘Biafra-land’ without a vision for expansion outside the South-eastern region. The primary activity of an agitator is in constant pursuit of hate speeches through empty threats and arrogance posture. This is not the Ndigbo that I know so well.

An Igbo Politician is a bridge builder, who establishes and sustains friendship across the Niger. The likes of Uzor Kalus of Abia, Rochas Okorochas of Imo, Peter Obis of Anambra among others are clear examples of successful Igbo businessmen who transcend geographic boundaries of Nigeria in wise investment in the productive sector, before venturing into politics to support the Igboland.

Unfortunately, the Biafran agitator has completely lost touch with the reality of our existence. The secessionist has forgotten that the map of the South-Eastern region of the 60s has completely changed in the new millennium where the minority tribes are no longer in that realm but in mostly Niger Delta region of the South-South. The Biafran Politician fantasises on annexing other resource-endowed territories by visualising Ijaw, Urhobo, Kalabari, Ibibio, Ikwere, Efik, Igala, Idoma and Edo into the illusionary Biafran Republic. Some of these ethnic nationalities have in recent times come out to dissociate themselves from the so-called Biafra agitation.

The Nigerian Igbo believes in oneness and indivisibility of Nigeria, he speaks Nigeria, breath Nigeria and will never leave Nigeria. An obvious example is the fact that Igbos in Kano populate the vast Sabon Gari District whose population is more than most big cities in the South-East. Apart from occasional sectional skirmishes which may not necessarily be their faults, the Igbos in the North are well loved by Northern leaders even protected by Arewa youths.

The Igbos are allowed to acquire properties and establish businesses in every Northern part of the country, but the Biafran sympathisers have continuously denied outsiders from owning lands for business related activities in the South-East. This glaring discrimination currently creates the disparity of inequality of business ownerships where an average Northerner can quickly relocate without losing a dime, while the sheer volume of investment of a South-Easterner can never be easily recouped or transferred even in decades.

It is necessary to point out that the modern day’s Biafran agitators hate Nigeria and Nigerians and have described the country as a zoo. The main agitator and Supreme Leader of Indigenous People of Biafra (IPOB) known as Nnamdi Kanu has not only publicly threatened to wage war against Nigeria in a bloody and violent confrontation but has also described any Christian that attends “a Church with a Yoruba Pastor as an idiot, imbecile and not fit to be a human being and worse than Boko Haram.”

In series of his videos and audios, available online, Nnamdi Kanu engages in lousy intimidation and nauseating statements. It is just ridiculous, however, that rather than condemning him and bringing him to order, some respected Igbo leaders, who have themselves built bridges across the length and breadth of this country, celebrate and even stand behind him over his treasonable case in the court.

While the rantings of Biafran agitators had gone on for a while without a reply, it was the reckless declaration of the ultimatum issued by the so-called Arewa Youths as counterbalancing response to the inciting statements that reawakens the consciousness of Nigerians to the danger of hate campaigns.

While it may be justifiable to unleash a ferocious dog against a neighbour’s untamed mad dog, we should nevertheless tame the fury of Arewa youths who may have the exact mindset of Kanu’s IPOB. Some may not issue empty threat, they can just misbehave like the mad dogs.

As Nigerians, we should deploy common sense through dialogue to resolve the contentious issues of our nationhood. After all the hullabaloos and threats, I am so sure that no one is going anywhere. We should remain united and stop the dirty politics of ethnicity, widely played by sponsored and misguided youths. The ill-advised agitators from both parties must have read slanted history books since they were not witnesses to the history.