The first witness, Michael Wetkas, who is an EFCC operative admitted that he neither obtained any statement from Saraki nor interviewed him on the charges before the court. 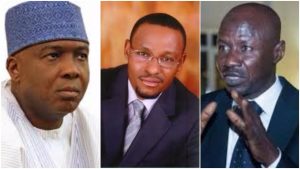 Bukola Saraki: Between CCT and EFCC
By Yushau A. Shuaib

“I swear by the Almighty Allah to do justice. We are all human beings and not God, we must be fair and just,” – Umar Danladi

Those were the words of the Chairman of Code of Conduct Tribunal (CCT), Danladi Umar at the resumed hearing on the trial of Bukola Saraki on May 17, 2016. He said he was under “serious influence” during the trial of Asiwaju Bola Tinubu in the same court in 2011, when President Goodluck Jonathan was in power. He, however, said he defied the excessive pressure and discharged Tinubu, an opposition leader, over allegations of false assets declaration. (Thisday https://goo.gl/tH6tu9)

The same judge recently discharged and acquitted Senate President Bukola Saraki over an asset declaration case. Immediately after the judgement, the Economic and Financial Crimes Commission (EFCC) was said to have threatened to invite the Chairman of the CCT over alleged corrupt practices. (The Nation: https://goo.gl/Wfv3pL)

The said corruption charge which anti-corruption agency wants to probe Danladi had already been cleared by the same EFCC under Ibrahim Lamorde in 2015 (Sahara Reporters: https://goo.gl/tnPTVV).

Not only that, on April 20, 2016, the EFCC under current Acting Chairman Ibrahim Magu further cleared CCT boss through an official letter with reference number EFCC/P/NHRU/688/V.30/99 which stated inter alia, ‘‘We would like to reiterate the Commission’s position in regard to this matter as earlier communicated to you and state that the allegations levelled against Justice Umar were mere suspicion and consequently insufficient to successfully prosecute the offence”. The spokesperson for the EFCC, Wilson Uwujaren even confirmed the clearance too. (Premium Times: https://goo.gl/nvvPSB)

The case of Saraki just like that of Tinubu is believed in many quarters to be politically motivated. The miraculous manner he emerged the Senate President against all odds and his strong opposition to a Muslim-Muslim ticket for the APC in the build-up to the 2015 general elections were major reasons for Saraki’s persecution and prosecution, based on his claims. (NAIJ: https://goo.gl/HYkBkR)

While many were disappointed with the judgement of CCT over Saraki’s case to the extent that some groups were cursing his family and his associates, it is necessary to look at the grounds for the acquittal. A mere allegation of offence does not guarantee a conviction for guilt. It is a popular saying in law that “he who alleges must prove that the accused actually committed the crime before the court can make any pronouncement.”

The main function of the EFCC is to fight economic and financial crimes but not to usurp the power of Code of Conduct Bureau (CCB) which is constitutionally empowered to prosecute cases under false declaration of assets. In prosecuting their case against Saraki, the government through its prosecutors called for only 4 witnesses and tendered 48 exhibits during the trial.

The first witness, Michael Wetkas, who is an EFCC operative admitted that he neither obtained any statement from Saraki nor interviewed him on the charges before the court. Meanwhile, Wetkas admitted that there was no evidence to show that Saraki did not declare a piece of property in London. Adding that he had no detailed information regarding the alleged undeclared property. (The Cable: https://goo.gl/b4HUnF)

The second witness, Amazu Nwachukwu invited by EFCC to be its witness was emphatic that he knew nothing about the purported foreign account operated by Saraki. He added that the bundle of documents in his possession at the tribunal was presented to him by the prosecution and that he was just asked to read the documents and not that he knew anything about them since he was not the author. (The Sun: https://goo.gl/ucn2aJ)

The third witness who is the Head of Investigation of the CCB, Samuel Madujemu admitted that Saraki indeed declared his assets and that of his wife and his children when he held office as Kwara State Governor. (The Guardian: https://goo.gl/fzusGL)

He further claimed that his agency had no formal report of the investigation carried out on the assets of Saraki. According to him, it was EFCC’s investigation after Saraki becomes Senate President that led to the arraignment on asset declaration. He further dropped a bombshell when he said: “On the documents so far tendered at the tribunal against Saraki, the documents were sourced by the EFCC operatives on the joint investigative team and I cannot speak for them here. In fact, I am not familiar with every aspect of the exhibits tendered because we in the CCB did not generate them.” (DailyPost: https://goo.gl/CBkniW)

In a desperate move for damage control after the contradictory evidence by the three witnesses, another banker, the fourth witness Mr. Bayo Dauda of GTB denied ever seeing any foreign account allegedly operated by Saraki. The Banker said he had never worked with foreign banks to know how they open accounts for their customers. He boldly stated that the documents presented to him to give evidence were handed over to him by EFCC when he reached Abuja and that he was neither the maker nor the signatory to the documents and as such, he will not be in a position to verify documents prepared by another person. At the last hearing day, he told the Tribunal that the contentious document inquired by the Tribunal patterning the transaction of the defendant cannot be found.” (PRNigeria: https://goo.gl/cGr7f4)

Meanwhile, as all the EFCC witnesses gave contradictory and weak evidence, the Justice Danladi Yakubu Umar, and his colleague on the bench, Agwadza Atedze upheld the no-case submission of the Senate President and consequently discharged and acquitted him. The tribunal stated that the evidence of the prosecution witnesses was manifestly unreliable and that no court could attach value to such let alone convict on it. The tribunal also stated that the testimony of the CCB Staff, who admitted that his report was based on information from his team members, rendered the whole evidence linking the defendant to the alleged offences invalid, adding that no conviction could be made on hearsay. (Punch: https://goo.gl/J5453B)

The tribunal explained that the admittance of the EFCC staff under cross-examination that Saraki was not invited for clarification on the grey areas in his assets form, grossly affected the competence of the charges, adding also that the claim by another banker that all documents it had linking Saraki to the alleged offences were lost in a fire accident further neutralised the evidence. ( DailyNigerian: https://goo.gl/GFmxJ6)

Since the case is going to the Appeal court for further judicial review, it is now time to allow the judges to perform their constitutional roles before we further engage in distractive media trial over a simple legal matter. (Daily Trust: https://goo.gl/ajd2uQ)

The two members of CCT panel deserve commendations and not knocks for their bold and courageous adjudication on this matter in spite of the intense pressures and distractions from powerful political forces.