Garba Shehu, Yushau Shuaib and Children at presentation of a book A Dozen Tips for Media Relations by YAShuaib in Abuja 2005

With due respect to my elder, I have been thoroughly embarrassed and even shocked that Mallam Garba has been misled in joining the bandwagon of those attacking former National Security Adviser, Sambo Dasuki blindly and baselessly. 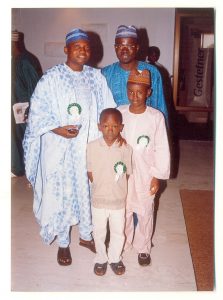 Garba Shehu, Yushau Shuaib and Children at presentation of a book A Dozen Tips for Media Relations by YAShuaib in Abuja 2005

The most painful and mind boggling dilemma in issuing rebuttals is the attempt to challenge respected professional colleagues who should know the truth from fallacy. Wrong actions of current administration of President Muhammadu Buhari have compelled some of us to take the pain and risk of disproving false allegations and reckless insinuations on innocent people by those in the corridors of power.

Mallam Garba Shehu, the Senior Special Assistant to President on Media and Publicity is one of senior professional colleagues who positively impacted in my career by benefitting from their guidance and benevolence (https://goo.gl/RZV6j3).

Meanwhile, with due respect to my elder, I have been thoroughly embarrassed and even shocked that Mallam Garba has been misled in joining the bandwagon of those attacking former National Security Adviser (NSA), Sambo Dasuki blindly and baselessly.

While Dasuki has remained in unlawful incarceration since 2015, the system has refused to give him the opportunity to clear his name on frivolous charges against him and occasionally prevented him from appearing in court.

In an attempt to defend the flagrant disobedience to court orders by the Buhari regime, Mallam Garba recently said that the government of Buhari is not ready to release Dasuki because according to him there “were many cases against Dasuki for which he had not been granted bail.”

Mallam Garba was further quoted to have said that “The ex-NSA’s problem is not with President Buhari who I must say has the highest regard for the rule of law. If five courts of the land are trying different cases in which a man is involved and one or two of those courts let the accused persons go home on bail, what happens with the other three cases?”

Mallam Garba should know that Sambo Dasuki was arraigned and charged on bailable offences which all the courts of competent jurisdiction have granted him bail. Since 2015, when Dasuki was arraigned before different high courts, he was granted bail by Justice Adeniyi Ademola and Justice Ahmed Rahmat Mohamed of the Federal High Court as well as Justice Peter Affen and Justice Hussein Baba-Yusuf of the FCT High Courts. The ECOWAS Court had also ordered the Federal Government to release him immediately from the unlawful custody and imposed a fine of N15,000,000 on the government but up till now, all the judgments have not been obeyed. There is currently no single court order or a legal warrant for his detention. Rule of Law indeed!

This is not the first time the respected political communicator, Mallam Garba would play to the gallery. On his assumption of office, Garba raised a similar erroneous insinuation against Sambo Dasuki on October 15, 2015, when he told the world at The Red Media Summit in Lagos on how he and others plotted to accuse Sambo Dasuki of coup plotting (Link: https://goo.gl/qqu7r9). He was quoted to have stated thus: “We agreed we were going to run a story announcing that the National Security Adviser at that time, Mr. Sambo Dasuki, was staging a second coup d’etat against Muhammadu Buhari.” As alarming as that statement was, Mallam Garba did not retract the offensive and offending statement. As a respected communicator, he should know better.

Meanwhile few year before then, Malam Garba predicted the challenges Dasuki would face as Fulani man from North-West against Kanuri people of North-East who would frustrate him. He made the assertion immediately after the appointment of Dasuki as NSA by President Goodluck Jonathan in 2012. In his weekly article in Premium Times with the title “Dasuki as NSA: Issues below the Surface,” (Link: https://goo.gl/Hi3Vib) Shehu even recommended and listed some Kanuri people that should have been considered for the appointment.

Mallam Garba claimed that the appointment of Dasuki as a Northerner might produce the direct opposite result of appeasement of the region. According to him “the Boko Haram terror movement is dominated by Kanuri boys, despite the recruitment of volunteers from areas outside Borno and Yobe States. Dasuki’s appointment ignored the historical rivalries between the Kanuris and the North-west or more directly, the Fulani hegemony.”

Buhari’s spokesperson therefore asked “Can a scion of the Fulani royalty, even though a Northerner cultivate the trust and confidence of the Kanuri boys against the background of these historical rivalries? Can a Fulani Northern National Security Adviser conduct negotiations for disarmament with Boko Haram in the face of these historical rivalries? This may be Sambo Dasuki’s biggest challenge.

“Whatever theories may have developed around Sambo’s appointment, the Kanuri factor in the appeasement policy should not be ignored. No confidence building strategy can succeed which ignores the undercurrents of historical rivalries between the Kanuris and the Hausa/Fulani of the north. It is doubtful if the North-East or Borno State in particular, lacks credible retired army officers who can do the job.”

Even though, those fear of my senior brother, Mallam Garba could not be ignored, especially when Dasuki came in at a period Boko Haram members were not only terrorising the North-East but the North-Central and North-West with weekly attacks on worship centres. Nevertheless, the ex-NSA succeeded in restricting terrorists’ notoriety to the North-East before recovering more than 25 towns from the Boko Haram. In fact, the excesses of Boko Haram were curtailed to the effect that 2015 elections were peacefully held throughout the federation, including North-East where governors and legislators were elected without any hitches.

I request my senior brother, Mallam Garba to read my “Open Letter to Femi Adesina” (Link: https://goo.gl/TFdNmP) on some of the achievements of Dasuki in office and the list of over 20 towns recovered during the previous administration. I appeal to professional colleagues in government to avoid playing politics with sensitive security issues that could be misleading.