Since NIA has claimed ownership of the money, was the EFCC misled? Is the mysterious whistle-blower a character in the inter-agency rivalry? Or is it another counter-intelligence by another foreign secret service against Nigeria? 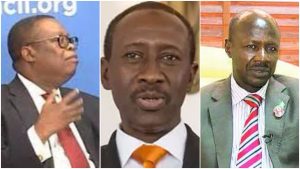 That NIA’s Black-Budget and Mysterious Whistle-blower
By Yushau A. Shuaib

Preparatory to the daring and merciless military operations against Boko Haram members, top officers of security and intelligence agencies were in Lagos and Abuja, towards the end of 2014 to interact with critical stakeholders that matter in shaping public perception and opinions. The then President of Nigerian Guild of Editors (NGE), Mr. Femi Adesina was part of the audience.

The interactive sessions involved the display of video clips of horrific atrocities of Boko Haram terrorists against humanity. Gory scenes of brutal executions of captured intelligence officers who were accused of spying on the terrorists’ group were shown. The officers and their informants were cruelly dismembered, buried or burnt alive by the dare devil terrorists.

One of the heart-aching videos was that of a captured female intelligence operative who was “daggered” into pieces before she could plead for her life. Few months after some debriefing with the stakeholders, through miraculous strategies of operations against terrorists, positive images emerged on the gallantry of Nigerian troops. PRNigeria released some of the declassified videos on the storming of Sambisa Forest by the special forces and intelligence operatives from the air and on the ground. The original video showed hijab-dressed female intelligence operatives, guiding women and children from the air raid to safe military zone.

Meanwhile, while the military and security agencies took credit for all counter-terrorism campaigns, most of the high-profile terrorists arrested, especially at the borders and across the borders were facilitated by the intelligence service. The service also facilitated the participations of reluctant neighbours in Multi-National Joint Taskforce (MNJTF) and other special forces for the success of operations.

Recently too, when 21 Chibok girls were freed by Boko Haram in October 2016, Vice President Yemi Osinbajo publicly disclosed that there was no exchange of detained members of the Boko Haram sect for the girls. The Information Minister, Lai Mohammed also strongly denied the report that Nigerian government paid a robust ransom for their release. Since no one knows what influenced the ‘Father Christmas’ gesture of Boko Haram leaders in releasing the girls which even took a section of the military by surprise, it is purely exceptional intelligence operations.

This writer has deliberately avoided mentioning any of Nigeria’s secret organisations on the above operations. The recent exposure of the National Intelligence Agency (NIA) to disrepute after the discovery of cash haul in an Ikoyi Apartment is a sad commentary to the one of the most organised, fine and respected intelligence organisations in Africa. Not only has the scandal damaged the integrity of the agency, it further exposed the Nigeria’s intelligence community to global ridicule.

It is necessary to point out that in security circle, a black budget is allocated for classified and other covert operations of a nation which can be expended under different covers and through different channels including funding of NGOs, Cultural groups, religious organisations, corporations, private firms and on most occasions through cash that could not be traced. Consciously and unconsciously patriotic and innocent citizens have supported or carried out intelligence activities without being identified with the secret service.

Even though there are declared staff who are authorised to disclose their identities, most intelligence operatives are undeclared and barred from disclosing their identities but only to close family members and associates. While some live in opulence for covert assignments, others act beggarly and pretend to be poor in sensitive terrains.

The scandal over N15 billion recovered by the Economic and Financial Crimes Commission (EFCC) at Osborne Street, Ikoyi, Lagos is quite embarrassing because the Director General of NIA, Ambassador Ayo Oke has claimed that the fund belonged to the agency.

The incident is coming at a period of an intense inter-agency rivalry where security agencies were allegedly reported to be behind the leakages of classified and confidential information to smear their perceived oppositions within the same government.

The above scenario is again playing out here. Now that NIA has laid claim to the amount found in Ikoyi apartment, does it mean the Economic and Financial Crimes (EFCC) was misled? Is the mysterious whistle-blower a character in the inter-agency rivalry? Or is it another counter-intelligence by another foreign secret service against Nigeria?

In a December 2016’s article by this writer on Magu’s EFCC: Between Suspects and Victims
(https://yashuaib.com/blogs/magu-efcc-suspects-victims/) I warned that “President Buhari should ensure that the brewing inter-agency conflict among critical institutions should be urgently addressed. For instance, if the EFCC should attempt to retaliate against the report of DSS, the result will not only be dirty but likely to compromise national security.”

While the EFCC publicized the discovery, it has totally failed to disclose the owner. Even the vibrant spokesperson of EFCC, Wilson Uwujaren had to put off his mobile phone for almost 72 hours during the fracas.

With all fingers pointing to the fact that the money belongs to NIA, the burden of proof is who is the mysterious whistle-blower? Could the whistle-blower have acted on behalf of an agency engaged in the rivalry or was it as major counter-intelligence operation by foreign interests to expose and embarrass our intelligence network?

There are many ways of removing public officers but such attempts should not be done by rubbishing the integrity of public institutions they represent, especially in Nigeria’s security architecture.

I strongly believe at this critical period and with the unabated inter-agency rivalries and the incidence of leakages of classified information by some agencies of government, the current National Security Adviser, General Babagana Monguno should be wary of these developments. Though a gentleman, he needs to be more pragmatic, charismatic, assertive and decisive in dealing with erring agencies.