This is not a joke, but a real-life story. I still wonder how my family members, friends and well-wishers would feel about my ‘ordeal’ inside the Kirikiri Medium Security Prison in Apapa, Lagos. In fact, this write-up commenced in the Prison. All my life I have tried to avoid any act or behaviour that would warrant me being sent to any solitary confinement 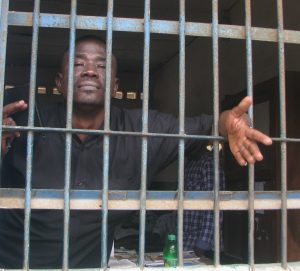 This is not a joke, but a real-life story. I still wonder how my family members, friends and well-wishers would feel about my ‘ordeal’ inside the Kirikiri Medium Security Prison in Apapa, Lagos.

In fact, this write-up commenced in the Prison. All my life I have tried to avoid any act or behaviour that would warrant me being sent to any solitary confinement whether cell, house-arrest, guard-room, or prison not to talk of the most popular (or is it notorious) Kirikiri Prison in Nigeria.

In the past and up till now, I deliberately try to avoid visiting offices of friends whose mandates are to detain people even when, professionally, I engage in crisis communication which involved relating with security agencies.

Meanwhile, I have also realised that the only person that could be sure of not going to be detained either in cell, house-arrest or prison must surely be the dead person in the grave. Influential leaders have been detained and incarcerated at various times; some went to detentions straight from highly powerful positions while others moved from detention centres to privileged posts. Nelson Mandela, Shehu Shagari, Muhammadu Buhari, Olusegun Obasanjo, Obafemi Awolowo, Wole Soyinka and even Sambo Dasuki who had been granted multiple bails are very few of personalities that have tasted state confinement and imprisonment, where their movement and freedom were not only restricted but denied.

Sometimes last year, I received an invitation by the Economic and Financial Crimes Commission (EFCC) over an investigation of a company involved in crisis management for the security sector. I felt embarrassed by the reckless and baseless indictment of the firm by the controversial and unceremoniously disbanded AVM Jon-Ode arms probe panel. I was nevertheless treated with dignity by the anti-corruption agency without being detained after providing necessary information on the issues at stake. Meanwhile, as a man, I have always prepared for the worst scenario in case of untoward eventualities.

Before I give the reason for my journey into Kirikiri prison, I know for sure that the right of prisoners in relations to physical integrity must have freedom from arbitrary arrest. No matter the situation, I know that potential detainees, by right, should be informed of the fact and grounds of any arrest. In fact, victims of emerging professional whistle-blowing enterprises deserve some respect because they are innocent until proven guilty in competent courts.

I must state that I had no hesitation when the Prison officials in Abuja, insisted that I must be conveyed to Kirikiri Prison. I was flown to Lagos and transported by a bus to the Prison in Apapa. I must also be very sincere to state that I was neither maltreated nor harassed from Abuja to Lagos even though we had flight delay.

At the entrance to the Prison I became scared to the marrow when I read a notice which stated that the Kirikiri Medium Security Prison was overcrowded. On that day, March 1, 2017, it accommodated 3051 prisoners instead of 1700 of its official capacity. More shocking was the fact that 2627 detainees were not convicted by any court but they were awaiting trial. Some awaiting trial inmates were immorally detained for frivolous offence of fighting, walking at odd hours and petition writings.

Rather than conveying me straight to the cell, the officials at the Kirikiri Prison took me to a barbing saloon where imprisoned barbers and trainees provide the services. Next to the barbing saloon were tailoring and shoemaking workshops where inmates were trained in the production of clothes, shoes, bags among others. I learnt some religious bodies and Non-Governmental Organisations purchase the items for sale outside the prison yards.

At another corner of the Kirikiri prison was a Library and a Computer Centre where some inmates study for examinations. Some even graduated with flying colours from the National Open University of Nigeria (NOUN), I learnt. By conventions, further education is to be provided to all prisoners while schooling of illiterates and young inmates are made compulsory. Even though Prison is not a place for recreation and relaxation, in this prison, there is a playground, a volleyball court and table tennis facilities. Such recreational activities like sports, music and other hobbies are by the same conventions required to be made available in prisons.

Strange enough, I noticed that most of the inmates were not malnourished but looked healthier than I had thought. I suspect that they are probably offered better medical examinations and treatments than it is imagined or believed.

While being led towards the prison accommodation, the official said that by law cells for individuals should not be used to accommodate more than one person while communal cells should only house prisoners who had been selected to share them. He added that all facilities should meet the requirement regarding health, heating, ventilation, floor space, sanitary facilities and lighting.

My ‘real ordeal’ inside the prison was how to convincingly inform my family members and well-wishers that I was never arrested but was actually on an official assignment and Special Tour of prison facilities in Lagos with some media executives including editors, columnists, broadcasters and journalists. We were being led and guided by the spokesperson of Nigerian Prison Service (NPS), Francis Enobore and the officer in charge of the Prison, Emmanuel Oluwaniyi.

As a proof of the tour of the prison, I requested the spokesperson of NPS to take my picture while standing at the Window of the Computer Centre. He obliged. After the tour, we returned to our hotel for buffet and attended a three-day workshop on prison reform organised by Prisoners’ Rehabilitation and Welfare Action (PRAWA).

After spending nights in the hotel, I returned to Abuja without spending a night in the Prison.