Home » Politics of Development: Between Jonathan and Kwankwaso 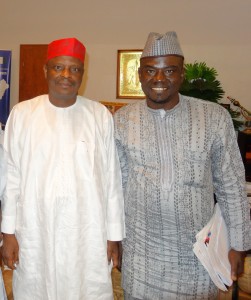 Developmental Politics: Between President Jonathan and Governor Kwankwaso
By Yushau A. Shuaib

At an informal gathering a few months ago, discussants attempted a comparison between President Goodluck Jonathan and some of the governors in the break-away new Peoples Democratic Party (nPDP). While some argued that the President and the governors are birds of the same feather as typical of Nigerian politicians, others insisted that there is obvious uniqueness that defines their individualities.

Rather than debating developmental issues, the argument dwelt largely on the characters of the individual political officers. Coincidentally, the debate came at a period when I had just published an article on an encounter I had with one of the gladiators of the nPDP, Governor Rabiu Musa Kwankwaso of Kano State after honouring an invitation extended to me by his hardworking and talented media aides, Baba Dantiye and Jafar Jafar.

Therefore, when my friends requested my opinion about the issues being debated, I felt hesitant because of the unfortunate way a powerful lady had engineered my premature retirement from the federal civil service 20 years after I joined.

The summation of my contribution is this: Many may have reservations about President Goodluck Jonathan, but I will not join the bandwagon of bashers of any government in power for attempting to be different. As a person, President Jonathan looks cool; his face reflects innocence, while his soft voice depicts harmlessness. His occasional promises are reassuring while his smile is infectious. Though he hardly swaggers like the big-guy, his simple gait portrays his humility.

Jonathan could be credited for some successes in the political and economic front, especially the inter-party tranquillity. The only snag is the intra-party rivalry within the ruling PDP. If Federal Capital Territory should be used to assess his presidency, then good roads network, sprawling housing estates, stable fuel supply, apparent opulence with state of the art automobiles cruising on the roads and ongoing railway projects should be considered as a plus.

Nevertheless, it is just unfathomable that his seeming charismatic demeanour and accomplishments are being rubbished by confrontational stances, inactions and misdemeanour of some of the major players in his admiration.

On the other hand, because of the close encounter I just had with Kwankwaso, I told my friends that the governor is a down-to-earth personality and sincere in his frankness. Beneath the humour of his occasional jokes are loaded messages and lessons to be learnt. He leaves you with an impression that: you may enjoy the laughter but get the message.

Having worked as an engineer for about two decades before becoming the governor of the state, Kwankwaso understands major developmental challenges in Kano which he frontally confronts in his second tenure. The hallmarks of his administration are developmental initiatives in the provisions of houses, scholarships, development of entrepreneurship skills among the youths, massive road projects and improvement of electricity supply for the benefit of the people.

Unlike Abuja where the Ministry of Finance struggle to accommodate capital projects, Kwankwanso makes sure that capital expenditure in Kano takes the largest chunk of the budget. In 2012 for instance, 63 percent of the state budget was dedicated to capital, while only 37 percent was tied to recurrent. So far this year, 75 percent of the budget has been devoted for capital and the remaining 25 percent allocated to recurrent expenditure. His administration avoids frivolous expenditures by ministries, departments and agencies (MDAs).

At the inception of his administration, Kwankwaso eliminated the allocation of security-vote to his office to block leakages. He also improved internally generated revenue from a paltry N400 million to N1.8 billion monthly. In addition to this, he reduced recurrent expenditures (from Government House, Deputy Governor’s office and all other MDA’s), thus saving up to N500 million monthly. To ensure transparency and accountability in governance, his administration now publishes weekly resolutions of the State Executive Council for wide dissemination to the populace.

As a former legislator who was elected Deputy Speaker of the House of Representatives, one may understand why Kwankwaso believes in the rule of law and allows due process as the guiding principle of his administration. While attempting to ban street begging and motorcycles as means of commercial transportation in the state, the Governor followed all legal and due processes and the state is now enjoying the dividends of the actions.

Not a person to be fooled by political scheming, the leader of popular Kwankwasiya political movement has a perfect understanding of Nigeria’s political dynamism having been a delegate to the 1994 Constitutional Conference. His involvement in the activities of progressive governors under the banner of nPDP is seen by his admirers as his quest to ensure equity and justice in the democratic process.

The former Minister of Defence certainly has a mind of his own and so, it is understandable that he has refused to be an errand boy or a copy-cat. It is also possible  that his prudence and determination to conserve funds for serious projects that will benefit the greatest majority of the state indigenes is a reason why his faithful wife remains out of public glare without maintaining the prevalent but illegal Office of the First Lady even though theirs is a monogamous family.

While some states are still facing enormous security challenges and political tension, Kwankwaso was able to curtail the excesses of religious fanatics and sectional politicians in the state due to some strategies he deployed as Chief Security Officer of his state. Some attribute his ingenuity to the experiences he garnered while serving as Defence Minister, Presidential Adviser on Dafur and Somalia and his membership of the Niger Delta Development Commission (NNDC) at various times.

A few weeks after the debate, while attending a programme in the United States of America, I received a call from one of the friends present at the forum. He told me Governor Kwankwaso wanted to see me immediately. On my return, I proceeded to Kano where I met the Governor one-on-one for more than one hour discussing developmental issues and how his administration has so far impacted on the people. We chatted about related political and social stability in Kano and the various programmes being undertaken in other parts of the country.

A surprising take-home for me from the discussion was the kind words the Governor had for President Jonathan despite the heated disputation among them. At a point, he described Jonathan as “a president who means well for the nation but I always wonder what other people do in his name.”