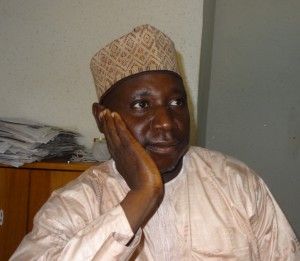 By Yushau A. Shuaib
In a country where everybody is perceived as corrupt, especially in the public service, Mr. Muhammad Tahir Zakari has distinguished himself as an incorruptible civil servant. He was among the 148 individuals who were conferred with Nigeria’s National Honours Awards by President Goodluck Jonathan on September 17, 2012.

Recently the online economic journal, the Economic Confidential in an investigation reveals that of those that got the National Honours Awards for 2012, he was the only person who was nominated on the basis of honesty by returning N6.2 million, which was overpaid into his salary account back into treasury.

The report also indicates that about 75 percent of the 148 recipients actually occupy public offices either as appointed or elected figures in the executive, judiciary and legislative arms of government. Some categories of the awards seemed to be reserved for particular groups of officers. For instance Supreme Court Judges are beneficiaries of CFR; CON are conferred on Governors, Ministers and Senators; OFR are bestowed on Members of House of Representatives, Deputy Governors, Diplomats and Legal Practitioners; OON are given to top management staffs in the public and the private sectors; while MFR is meant for security personnel, civil servants, local traditional rulers, community and religious leaders. Most of the nomination or final recommendations are done by the power-that-be. In fact one of the listed beneficiaries, a deputy governor was removed from the list by the order of the boss. In the face of all these, there are also allegations that in Nigeria some individuals and groups could pay anything to get any kind of awards even for doing nothing.

The story of Zakari’s emergence as most deserving of the national award started in November 2011, when he received a credit alert on his mobile phone of the sum of N6,241,469 instead of his usual monthly pay of N62,000. He thought he was having a sweet dream not nightmare. At the time he got the alert he actually had N400 as his credit balance.

A dazed Tahir immediately rushed to the bank where it was indeed confirmed that he had the millions deposited in his account. Back home, he then narrated his discovery to both his mother and his wife about what could be considered as “Manna from Heaven.” A deeply religious family, the two women in his life all encouraged him to report and return the millions and not spend what did not belong to him.

He admitted that as a human being, something was telling him that “God has many ways of blessing and enriching individuals. I initially thought probably that was the way God wanted to intervene in my life by mysteriously depositing money in my bank account. But long years of religious and moral education reinforced by admonishment from the females in my life prompted me to immediately report and return the money which was N6.5 million.”

When friends learnt about the refund of the whopping amount of money, some withdrew their friendship while others taunted him as “a typical of the remaining few Nigerian Mumus (fool) that could get free money and return it when he earns a meagre salary.”

“I could feel others jeering at my resolve. As a human being, the temptation was high, considering the kind of environment we live in. But sometimes you just need to take a most dignifying action and take joy in that which I did sincerely.”

Blessed with eight children comprising of seven boys and a girl, Tahir further admitted: “I was also afraid to tarnish my family name if I spent the money and the error was later discovered by the authority. That could be very shameful too!”

His action was reported to the Independent Corrupt Practice Commission (ICPC), Economic and Financial Crimes Commission (EFCC), Head of Service and the Office of the Secretary General of the Federation.
Subsequently he received a letter from Office of the Accountant General of the Federation commending him for his “show of honesty by returning an error payment to the tune of N6.2 million.” It was on August 27, 2012 that the Secretary to the Government of the Federation, Senator Pius Anyim sent him a letter to inform him that the Federal Government had approved the conferment of the National Honours in the rank of MFR on him. In honouring him, President Goodluck Jonathan said the award was in recognition of Zakari’s outstanding virtues and in appreciation of his service to the country, Nigeria, without adding “where many are presumed to be corrupt.”

A graduate of Mass Communication from the reputable Bayero University Kano, Zakari was born on March 20, 1971 in Garun-Mallam, Kano State. He did his National Youth Service in Enugu before he was offered appointment into Federal Civil Service as Information Officer. He was then seconded variously to the National Films and Video Censors Board, Ministry of Water Resources and now in Ministry of Agriculture, Abuja.

While we celebrate a young civil servant as incorruptible, we only hope some of our leaders who are mostly disdained for their excessive wealth from sophisticated corruption would not be laughing at poor Zakari, who believes an honour in the face of his unrealistic wages is adequate compensations for incorruptibility.

As we are encouraged by the exemplary conduct of Zakari, which should be emulated, it is doubtful if many poor Nigerians would accept the typical Nigeria’s National Honours if they have the option of a million Naira gift. I believe there are many Nigerians out there setting records and good examples but would never ever make it to the seeming National Honours for top public figures and title holders.

This article by Yushau A. Shuaib has been published in the print edition of the the Economic Confidentia October 2012, National Mirror October 8, New Nigerian October 8, People Daily October 9, Leadership October 9, 2012, The Guardian October 16, and Daily Sun October 24, 2012