Home » Flood in the Eyes of the President 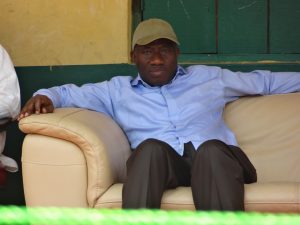 By Yushau A. Shuaib
While addressing the nation in a broadcast over the unprecedented flood disaster that ravaged many communities in Nigeria, President Goodluck Jonathan’s eyes and head movement, betrayed the fact that he was reading from a prepared text, though there was no sign of a speech on his table.

His stiffness said it all. He neither gesticulated nor moved parts of his body as he is wont to in normal discussions and addresses to the rhythm of the broadcast. Aside from the motion of his mouth as he uttered the words and the intermittent sounds of billions of Naira donations to some federal institutions and states, the broadcast was a mere dictation session.

However, an opportunity to study the natural moods of the President to the devastation away from the dictates of protocol, came when he undertook a tour of some selected states affected by the flood. He was accompanied on the tour by Minister of Environment, Hajia Hadiza Mailafiya and Director General of National Emergency Management Agency (NEMA) Muhammad Sani-Sidi among others.

The tour was indeed an opportunity to see him move in flesh and react naturally in his interaction with victims. He responded directly to their plights and walked under the sun to inspect the internally displaced persons’ (IDPs) camps. Uncharacteristically, there were few body guards and security men accompanying him. In fact, any displaced person could easily walk to him and hold his hands as if it is not the same almighty Nigerian leader. The atmosphere was quite convivial.

In all the states he had visited, President Jonathan encouraged leaders of the IDPs to voice out their minds openly on their plights. In response, victims narrated how they lost their homes, livestock and farmlands. They gave gory tales of deaths, missing persons and submerged markets, schools, police stations and places of worship.

In Kogi for instance, President Jonathan was in a melancholic mood. His mien fell further when mothers brought newly born babies to him. He also learnt that some men committed suicide following losses of loved ones and lifelong investments. He admonished victims to desist from taking extreme decisions. He said: “please, don’t commit suicide. You have a government that will assist you. Even, if you borrow money from banks, don’t worry, when the flood is over, we will know how to deal with it. Be rest assured that the government will take care of the situation.’’

In Adamawa State, he disclosed that the government plans to construct more buffer dams on rivers Niger and Benue to check the menace of flooding in communities along the river banks and from neighbouring countries. He disclosed that the flood this year was a natural phenomenon due to climate change occasioned by global warming and pointed out that government would take steps to prevent a future re-occurrence.

In Delta State, President Jonathan inspected a camp, equipped with a skills acquisition centre where displaced persons were learning trades, artwork, music, drama, hair dressing and computer skills. While he believed that such facilities could make them useful after leaving the camp he disclosed that the government had initiated measures for proper resettlement of flood victims.

While addressing displaced persons in Anambra, he advised them not to worry as the Federal Government was collaborating with sympathetic groups and individuals to make life better for them after leaving the camp.

In Rivers and Bayelsa states, President Jonathan confessed that the flood disaster, which destroyed property worth billions of naira, was beyond the capacity of the Federal Government to solely remedy. He therefore solicited the supports of development partners and international bodies.

In Taraba State, while assuring that the European Union and the World Bank have indicated their readiness to assist Nigeria, the President stated that the water level was gradually reducing. He gave the assurance that government would provide farmers with maturing seedlings that would guarantee early harvest of farm produce as an antidote to the much anticipated food crisis. 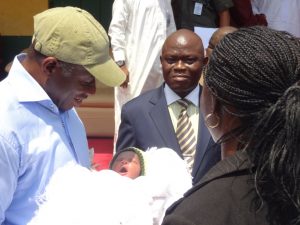 In all the states he had visited, President Jonathan allowed governors to present their opening address and thereafter, stood and listened attentively to the victims. His responses were calm, re-assuring and warm as he sometimes cuddled new born babies while addressing the mostly women and children victims.

The President had also explained that the inauguration of a high power committee on Flood Relief Fund co-headed by billionaire businessman, Alhaji Aliko Dangote and human rights activist, Chief Olisa Agbakoba was to raise funds, which will mitigate the effects of the devastation. He explained that membership of the committee included “individuals who could not steal people’s money because they include philanthropists and advocates of transparency and accountability who will not also condone injustice.”

While most of the utterances and actions of President Jonathan over the flooding are commendable, the establishment of the Dangote’s committee should have been in consonance with the enabling laws. As former Chairman of the governing council of NEMA, the President would recall that there is a provision envisaging such development in the law that established NEMA: Act 12 as amended by Act 50 of 1999. Among other things the law empowers NEMA to “co-ordinate the activities of all voluntary organisations engaged in emergency relief operations in any part of the Federation; Receive financial and technical aid from international organisations and non-governmental agencies, for the purpose of disaster management in Nigeria; Collect emergency relief supply from local and foreign source and from International and non-Governmental Agencies; and distribute emergency relief materials to victims of natural or other disasters and assist in the rehabilitation of the victims, where necessary…”

In view of the above therefore, the government could delegate and designate the Dangote Committee, as National Fund Raisers, to assist in the mobilisation of funds for the relevant established agencies including State Emergency Management Agencies (SEMA) to manage the processes judiciously. The secretariat could be in NEMA. If government is still more concerned about the selected individuals, the President could nominate them into membership of NEMA governing council.

It does not augur well to relegate established statutory institutions to the background due to vague misgivings. No-one is infallible, our leaders need to be supported and guided appropriately to take rational decisions to better the society without entertaining any fear whatsoever.