Home » That Obasanjo’s Bombshell on the economy 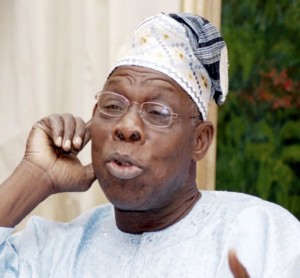 At a recent advocacy workshop organized by the Revenue Mobilisation Commission (RMAFC), on the need for economic diversification and revenue generation, in Abeokuta, former President Olusegun Obasanjo dropped another bombshell on the economic performance and problems confronting the nation.

His criticisms of the government could be his usual blunt frankness as this writer had witnessed some of his combative postures in villa while he was President some years ago. I will come to that.

Against the backdrop of grinding poverty and allied economic hardship caused unemployment in Nigeria Olusegun Obasanjo warned that popular revolt as recently witnessed in the Arab World might occur in Nigeria if the precarious socio-economic conditions of the citizenry were not urgently addressed. He pointedly stressed that there was discontentment in the land.

Before his warning in Abeokuta, just recently at his investiture as the First Grand Patron of Nigeria- China Business Council (NCBC) in Lagos, Obasanjo had queried the squandering of $35 billion Nigeria foreign reserves that he left in office in 2007, saying the country’s leaders and people need to be prudent to get out of its economic woes currently confronting the country. He even advised that Nigeria should borrow a leaf from the Chinese economy that is designed for sustainable growth and development.

While bemoaning the shrink in the nation’s foreign reserves, he said China was working assiduously to improve its economy and foreign reserves while Nigeria was busy reducing its own. According to him: “We left what we call excess crude for the raining day, up to 35billion dollars; within three years, the 35 billion dollars disappeared. Whether the money disappeared or-like the governor said-it was shared, the fact remains that $35 billion disappeared from the foreign reserve I left behind in office.” Surprisingly up till today no one is asking question after the disclosure before he dropped another bombshell.
The Abeokuta workshop gave the former leader ample opportunity, as usual to speak extemporal with jokes and innuendoes which are loaded with warning messages. He said: “There is the possibility of having the Arab Spring in Nigeria if similar conditions, hardships and un-employment which gave birth to it are not addressed.”

Citing Libya and Egypt as countries that witnessed the “Arab Spring”, Obasanjo said though there was appreciable economic growth in both countries, their people revolted because there was “a disconnect” between the “economic growth” in those Arab nations and “discontentment” of the people for democratic practice. Obasanjo said: “It doesn’t matter which way you look at it today. People are now talking of Arab Spring. And some people will say, is Egypt not developing? On economic scale, after South Africa, it is Egypt in Africa. Has Libya not got resources? At one time Libya was producing as much oil as Nigeria and in terms of Gross Domestic Products (GDP), it was growing well.”

The former leader, agreed with the current Chairman of RMAFC, Engr. Elias Mbam in lamenting that the nation has been “mobilising and sharing revenue” from only one source – oil, and stressing that the time had come for the governments to devise ingenious ways of expanding their revenue base by venturing into agriculture, tourism and manufacturing which was the purpose of the workshop.

He therefore advised the three tiers of governments in Nigeria to pay special attention to agriculture and agro-business as tools for employment generation for the “burgeoning army of unemployed Nigerians so that the Arab Spring does not rear its head in the country.

He also urged financial institutions, large-scale farmers, small and medium scale farmers, researchers, retailers and distributors and governments to get involved in using agriculture and agro-business to create jobs and food in order to enhance national security and stability.

After the workshop some of the participants who had never met or seen Obasanjo spoke in public were marveled by his power of oratory with proven statistics in his extemporal remarks. They asked: “Is this the same Obasanjo that many Nigerians love to dislike?”

Though many Nigerians may have reservations on the man that ruled them twice first as a military leader and later a civilian president making him the longest serving Head of State in Nigeria, Obasanjo is eloquent, charismatic and intellectual leader who could discuss any topic with meticulousness and distinctiveness of academic scholar and political orator. In the face of some of his obvious shortcomings, especially unforgiving nature, he is widely respected globally as an African leader of repute. His views are still respected abroad, though the same could be ignored in the country.

Obasanjo is largely misunderstood by some of his actions against those he perceived as his enemies. He seems to be very sincere about Nigeria project and to some extent a patriotic man. While some officers during his tenure found it difficult to tell him the truth, but with my korokoro eyes I witnesses several occasions where the former Chairman of RMAFC, Engr. Hamman Tukur always took on him whenever we were on a visit to submit some damning reports on the oil sector, external debt management, monetization policy and fiscal issues.

I remember an episode where he banged his table in the villa and shouted at Tukur: “Chairman or whatever you call yourself I am the President and the Commander-in-Chief. You cant come here to be talking nonsense and indicting my officials.” Though the report was submitted after heated arguments, he nevertheless implemented some aspects of the recommendations through probes and sanctioning of officials involved in billions of Naira hanky-panky. And the mother of all surprise: he reappointed the same Tukur against stiff opposition from most members of his cabinet.

The fact is Obasanjo had a good team with good intentions during his tenure. The alleged Third-Term ambition and his unnecessary infighting with his Vice President Atiku Abubakar distracted the administration and consumed their reputation.

This article by Yushau A. Shuaib has appeared in the Economic Confidential, Daily Trust, Thisday, Nigerian Tribune, Vanguard, Champion, New Nigerian, the Sun and Punch in December 2011