Since the President Yar’Adua has not died, against the alleged permutations and calculations of invisible elements to realize wicked agenda, we should support the administration to successfully deliver the promises made to electorates including the most talked about Seven-Point Agenda, to at least complete the first tenure which is half-way. 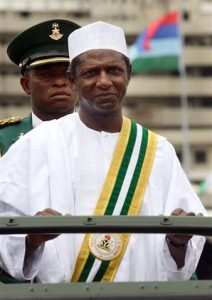 The above headline is not intended to play pun or be mischievous but rather is a response to worrisome feelings amongst Nigerians on the plight of President Umaru Musa Yar’Adua over the sensationalism making the rounds on his ill health. The debate over his purported ill-health overshadowed all other critical socioeconomic matters taking place in the country.

From the hushed tones, to private discussion and even in places of worship the issue generated genuine concerns, and even beer parlor analyses rented the air which further prompted disturbing headlines seeming to ask: “if President Umaru Yar’Adua Dies!” In fact some of the insinuations are scary speculations over likely consequences that may befall the nation. The nation has witnessed so many crises that we won’t pray for a repeat of issues of national tragedy.

Considering some of the fears expressed, many would have anticipated arrival of a coffin from the Presidential Jet, but President Umaru Musa returns safely to the country from the officially disclosed Lesser Hajj and unofficial announced medical check-up in Saudi Arabia.

As President of the country, Umaru Yar’Adua obviously cannot govern alone without having and relying on able lieutenants who are in his cabinet to assist him in the discharge of constitutional responsibilities. That was demonstrated in his absence as the nation was not grounded by ineptitude of any of the ministers.

During his stay abroad, there were many developments that require public attention but which were not made issues of national importance. For instance, within the weeks of his absence, over N78billion was released from Excess Crude Account to augment statutory allocations of August 2008 to federal, states and local governments. That was after over N360billion was shared to the tiers of government and agencies. Likewise at one of the Federal Executive Council meetings which was chaired by Vice President Goodluck Jonathan, a whopping sum of N13billion was approved for various projects across the country which covered power, education, science and technology, transportation and Federal Capital Territory. In fact breakdown of the contracts which was detailed in an online economic intelligence journal, the Economic Confidential, list of the beneficiaries, the contractors, specific amounts and places for the executions were stated. Yet not many Nigerians bother to know of these projects and enquire how they would positively impact on the nation and its people.

The most painful experience from the saga of the two weeks foreign trip, were confusing announcements and counter announcements from oppositions and government officials respectively on the true condition of the President. In fact when official channels were not forthcoming with accurate, timely and reliable information, Sahara Reporters an online news agency feasted on the vacuum by regularly releasing incredibly detailed reports from alleged highly reliable sources. Surprisingly, the online portal, gained more visitors and strangely became the most cited news media on the president’s whereabouts.

While the Information Minister and spokesperson of the president, John Ogar Odey and Olusegun Adeniyi respectively, tried to manage the issue and boost the image of the president through their cautious and occasional official releases that did little to douse the mounting tension they were accused of being too conservative with the truth. As much as I must avoid unnecessary bashing from the public in an attempt to defend their approach, it must be pointed out that personalities being managed by publicists most times determine and give directives on how their profiles should be projected and protected. Since such principals may not realize the implication of refusing professional advice, they learn the hard way from bitter experience.

Although no one may know exactly what interacted between the president and his image managers, it is necessary that the public should always be adequately informed on public figures that influence direction of government. Nigeria’s president is like a father of large family, the nation which is his primary constituency and responsibility. A situation where spokespersons seem to be gagged and viewed by professional colleagues as weaklings in performing their responsibilities, their actions and inaction would affect their credibility and dent the reputation of the institutions they represent. That is the truth without any pretext.

Though there could be implications for breaking Hippocratic confidentiality even on the health of an ordinary individual, especially in divulging the nature of one’s ailments, I doubt if there is anything wrong in stating that one has gone for medical check-up and seek the understanding and prayers of the public. That could have been a very open and transparent public disclosure to prevent unnecessary controversies and second guessing.

The situation has forced some people in some quarters to nurse grudges and feel bitter on the entire saga as some section of the media felt sideline or betrayed after exhibiting patriotism in their professional conduct. The government may need to reassure the citizens on its continuous commitment to uplift their wellbeing and where necessary tender apology for erring in the entire episode.

I feel pity for President Yar’Adua who, I believe strongly, means well for the nation, in his humble ways of doing things. We could recall how he was persuaded and cajoled to contest when he had already made up his mind to become a university lecturer after his second tenure as Executive Governor of Katsina State. We could remember the fear over his health during the campaigning. His staunched supporters and campaigners in high places did not even allow him the opportunity to speak out his mind as they told us he was strong and capable of leading the nation to prosperity and greatness when he was described as the only incorruptible governor in Nigeria who developed his state to the admiration of others. So far he has demonstrated some leadership qualities and taken extreme courageous steps even against his mentors, especially for not shielding anyone from probes and prosecutions.

Every individual has a weakness and limitation; we should understand his constraints and appreciate his strength, will-power and efforts he has made so far in stabilizing the economy and sustaining peaceful coexistence amongst all the ethnic groups. We should even commend him for not dealing decisively with some treasonable felons who indirectly wage war on our collective nationhood but rather give them enough time to do a rethink and retrace their criminal steps before saying “Enough is Enough.”

Since the President has not died, against the alleged permutations and calculations of invisible elements to realize wicked agenda, we should support the administration to successfully deliver the promises made to electorates including the most talked about Seven-Point Agenda, to at least complete the first tenure which is half-way.

We have seen healthy looking rulers whose behavior and pronouncements including dictatorial tendencies clearly indicate their grievous infirmity, while the lanky and frail-looking leaders like Mandela remain great icons of democracy. We have also seen strong people dying in lesser strenuous exercise, even in bedrooms, while the presumed weak persons living longer in active service to their people. Please no one should wish our president otherwise.