On Early Marriage and the International Women’s Day
By Yushau A. Shuaib

In preparation for the 2021 edition of the International Women’s Day, Hawwah Jiddare, a vocal feminist from Northern Nigeria and Chevening Scholar, requested if I could recommend any person to discuss the rampant cases of early marriage in Arewa, Northern Nigeria.

I told her that not only in Northern Nigeria but also across Africa, a lot of educated people and political leaders are products of early marriages. I added that beyond the hysteria and negative denotations around early marriage, many of these experiences could be narrated from proper and more positive perspectives.

In her response, Hawwah who runs “Sheroes”, a publishing platform for women’s empowerment, advocacy and documentation, requested my participation as one of the panelists.

“As a journalist, writer, author and Public Relations practitioner, your role is to give us an objective rationale behind a situation where 59% of girls are married before the age of 18 in Northern Nigeria, even though it does not guarantee them having an education…” she added.

While mulling my proposed participation in the webinar, whose agenda pertaining to the theme of discussion was not immediately clear to me, Hawwah added that, “What is the rationale behind such beliefs and actions in the North?” 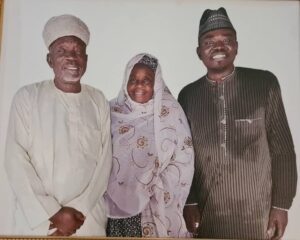 I suspected that she asked the question as a way of goading me and inciting my interest in the discussion. It was a fairly emotional issue for me, not only because of some of the misconceptions that have come to be attributed to the issue of early marriage, but also because I am a product of parents who married early. Yet, the experience of my family has been nowhere near the predominantly negative narrative being peddled around. I can say the same for a number of families I know. My father evolved to become a distinguished scholar and academic, who is now retired, while my mother is a trader, who is now a remarkable matriarch of our family. They both remain strong, physically and mentally till date.

I decided to accept the invitation to be a member of the panel on early marriage and girl child education, as a way of offering my lived perspective to the issue of early marriage in the North.

During the webinar on March 8, the International Women’s Day, I came into the same discursive space with other panel members who had contrary views to mine, including a legal practitioner, a gender activist and a medical doctor.

Since I had the opportunity to speak first, my argument set the agenda of the discourse.

I insisted that early marriage, as distinct from child marriage, should be tolerated and encouraged in society. Since a marriage is a union of two people who have met certain conditions set up by different cultures, customs, religions and legislation, then it should naturally lead to a legal and legitimate companionship.

The designation of legal adulthood and the marriageable age in many countries is 18 years; however, the marriageable age may be older or younger in other countries. Still, cultural traditions may override legislation, as many jurisdictions permit early marriage with parental consent or in special circumstances, such as teenage pregnancy.

Meanwhile, in exceptional cases, apart from parental consent, authorisation from the court and religious laws allow for marriages below the age of 18 to hold.

A report of the United Nations Population Fund (UNFPA) shows that in 2010, 18 years was the minimum legal age for marriage for women, without parental consent or approval by a pertinent authority, in 158 countries; also, in 146 countries, state or customary laws allow girls younger than 18 to marry with the consent of their parents or other authorities. Still, in 52 countries, girls under the age of 15 can marry with their parental consent.

Most religions forbid the marriage of a female before the onset of puberty and maturity. In fact, disputes regarding physical maturity are often resolved by a scholar or a judge, potentially after examination by a female expert witness. In addition, many religions also vehemently prohibit sexual intercourse outside marriage; therefore, they establish a minimum age for marriage in one way or another.

Obviously, there are other factors responsible for early marriage, which include the promotion of a sense of responsibility, the guarantee of security and prevention of social decadence. The unfortunate cases of baby factories where young girls are made to reproduce essentially for illegal adoption could be avoided even when such adoptions are common and encouraged in some developed countries.

During the webinar, I pointed out that early marriage provides a safety net against poverty and deprivation, which could lead some to prostitution and drug addiction. It also protects the female, especially, from sexual violation and insecurity, particularly for those who live in or find themselves in slums and crisis zones.

We should also be mindful and aware of the fact that political and financial alliances between parents, beyond poverty and insecurity, are also rampant among the Northern elites, who seal these relationships by arranging marriages for their children.

Meanwhile, in most states in Northern Nigeria, newly married wives are becoming homemakers and home-entrepreneurs through skills acquisition. They now engage in tailoring, food catering and snacks making services, among others, from the comfort of their homes. Surprisingly, some of the skills being utilised and deployed are acquired through online programmes on credible social media platforms, websites and webinars, and not necessarily from conventional schools, particularly during the coronavirus pandemic.

While age can occasionally be a wrong indicator of physical, emotional and psychological maturity, some good insight can be gleaned from how in these modern times, young people are emerging as very successful entrepreneurs, who are creating huge business enterprises and empires early in life. Interestingly, some highly successful entrepreneurs have been found out to be even school dropouts. The stories of Mark Zuckerberg of Facebook, Matthew Mullenweg of WordPress, Catherine Cook of MyYearBook.com, Blake Ross of Mozilla Firefox and even Justin Bieber, a singer and performer are proof that with focus, starting things early in life can only serve to enhance one’s potentials.

The advocacy for early marriage, rather than child marriage, is one that hinges on the promotion and encouragement of reciprocal love, affection, alongside mutual respect and understanding, as against a union formed through compulsion or the forceful yoking of two people.

It is necessary to urge partners who are candidates for early marriage to be strong, confident, and supportive of each other in achieving their personal and career goals. They should also seek to be always level-headed, thoughtful, and with senses of maturity in managing their emotions. Quite unfortunately, many even above the age of 40 cannot exhibit the same level of maturity displayed by a number of young people.

While the other panel members were not comfortable with some of my submissions, one of them even made bold to suggest that the best age for marriage should be between 35 and 40 years! Nevertheless, the point I reiterated in the webinar is in support of early marriage and not child marriage.

On this occasion of the International Women’s Day, we must acknowledge women for making all of us in society aware, appreciative and proud of their fundamental and remarkable contributions to our development.