Home » From TRADOC to Service Chief: The Story of Irabor, Attahiru 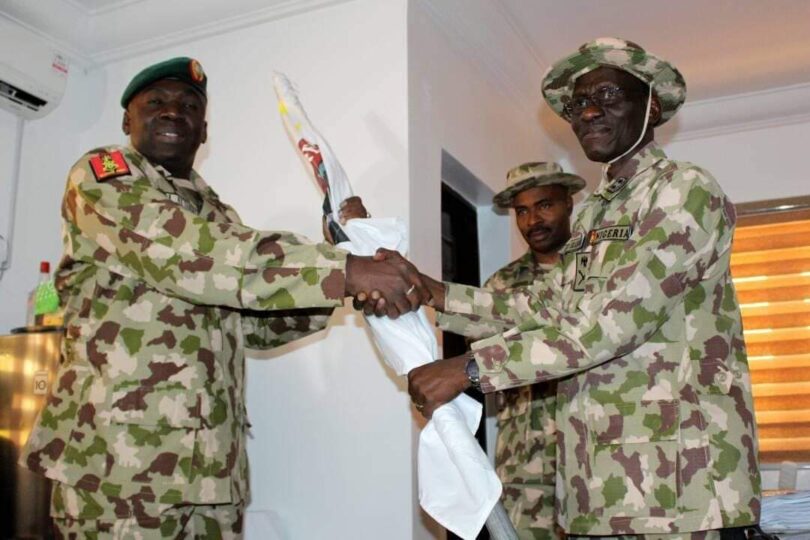 From TRADOC to Service Chief: The Story of Irabor, Attahiru
By Yushau A. Shuaib

The story of Major Generals Lucky Irabor and Ibrahim Attahiru, the new Chief of Defence Staff and Chief of Army Staff, respectively, is like that of two blood brothers following one another.

Before their appointments as service chiefs by President Muhammadu Buhari, Irabor and Attahiru were Commander and Deputy Commander at the Training and Doctrine Command (TRADOC Minna) of the Nigerian Army, located in Minna, Niger State.

Established in 1981, TRADOC is a research-oriented formation in the Nigerian Army. It is nevertheless dreaded by many officers who regard it as a kind of Siberia, a dumping ground or a quarter-to- retirement construct for senior officers who have fallen out of favour.

In reality, TRADOC is charged with doctrinal training and combat development, while supervising and coordinating research and development of all training schools, depots and the command college of the Nigerian Army.

Before the establishment of the Nigerian Army Resources Centre (NARC) in 2015, TRADOC had served as a major senior think-tank and a liaison centre between the Army and educational establishments, in ensuring the professional development of officers. It also serves as a corps headquarters for directing the operational tasks of various divisions of the Army that are on deployment.

Irabor is a member of Regular Course 34, whereas Attahiru is a member of Regular Course 35 of the Nigerian Defence Academy. They have both served as Theatre Commanders of Operation Lafiya Dole, the central counter-terrorism and counter-insurgency outfit of the Nigerian Army in North-Eastern Nigeria. It was Irabor, as Theatre Commander of Operation Lafiya Dole, who handed over the leadership of the unit to Attahiru on May 30, 2017.

General Irabor, the new Defence Chief obtained a Bachelor’s degree in Engineering from Obafemi Awolowo University and Master’s degrees from the University of Ghana, Accra and the Bangladesh University of Professional, Dhaka. He is an alumnus of the National Defence College, Bangladesh and the Harvard Kennedy School of Government, USA. He also attended the Armed Forces Command and Staff College (AFCSC) and Ghana Armed Forces Staff College, Teshi, among several other military courses.

The two Generals brought relative stability to the North-East region while they were Theatre Commanders of the counter-insurgency effort at different periods.

In fact, Irabor, as the Theatre Commander of Operation Lafiya Dole in 2016, was responsible for the capture of Alargano forest, the acclaimed spiritual base of Boko Haram, and the rescue of thousands of civilians, including two Chibok girls earlier abducted by terrorists. He also led the MNJTF in the clearance and domination of the towns of Gashigar, Arege and Metele in the North-East, as well as the destruction of several terrorist camps and IED-making factories in the Lake Chad Basin.

Meanwhile, as Theatre Commander, Attahiru created dugouts along the crossing points of the Boko Haram terrorists, to deny the group freedom of action and stem the conduct of their nefarious activities, before launching Mobile Strike Teams (MSTs) to reinforce the Mobile Brigade Concept (MBC) adopted in the Theatre to facilitate the quick defeat of the terrorists. At least five top commanders of Boko Haram and over 70 of their fighters were killed in the offensive, while 72 other members of the terror group surrendered to the Nigerian troops through non-kinetic and coordinated media operations he commissioned.

Even with their closely related professional attainments, yet in terms of personal dispositions, Irabor could be diplomatic in approach on necessary exigencies, while Attahiru is noted as being quite rigid on the levels of military discipline and operations.

With the appointment of these new service chiefs, the next counter-insurgency campaign should not only be aimed at the deadly Boko Haram/ISWAP terrorists but it must also be targeted at their informants and the communities that harbour terrorists. It is undeniable that terrorists do not drop from outer space to launch their attacks on troops, travellers and other innocent citizens, as they are also located in the same communities that Nigerian troops are trying to protect.

Therefore, in the two remaining years of President Buhari’s administration, the military should deploy sophisticated surveillance equipment for intelligence gathering, and to tackle informants and communities that are protecting and harbouring terrorists. It is high time the government puts an end to these treasonable acts of sabotage of the security and well-being of the country, which also undermines the effectiveness of our gallant forces and leads to the unfortunate erosion of their numbers.

The new service chiefs including Rear Admiral Auwal Z. Gambo, Chief of Naval Staff; and Air-Vice Marshal Isiaka O Amao, Chief of Air Staff. should be aware that is not how long they are in office that really matters, but the swiftness of the sea-change in the impact that they bring to bear on Nigeria’s deeply deteriorating security situation, towards the reclamation of national safety and stability. As they set out in their new, even if highly formidable engagements, may the best of their efforts be all that our country needs in restoring its balance.

Yushau A. Shuaib
Author “An Encounter with the Spymaster”
www.YAShuaib.com