Painful any insinuation that questions the loyalty of a subordinate and doubts the strength and competence of the boss. Such a dilemma merely creates feeling of betrayal and instigates a crisis of confidence that can distract and derail a focused administration. In our clime, there is a thin line between sanity and insanity among political fans (fanatics) whose supports are based on ethnic, religious and sectional sentiments. 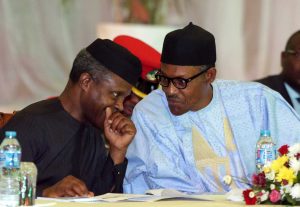 The Presidency: Osinbajo and Unquestionable Loyalty
By Yushau A. Shuaib

In September 2008, about 9 years ago, this writer published an article title “If Yar’Adua Doesn’t Die!” (https://yashuaib.com/politics/if-president-yaradua-doesnt-die/) It was a response to strong insinuations in the media on the plight of President Umaru Musa Yar’Adua who was alive then but some commentators were already expressing views on expectations after his likely demise.

We are currently witnessing a similar scenario as the national discourse has shifted to debates on the ailing or recuperating President Muhammadu Buhari who left the country on January 19, 2017 for medical vacation in London after handing over power to Vice President Yemi Osinbajo to act as President.

The media is awash with views of Nigerians as well as patriotic commentators over the transfer of power and the commendable progress made so far in the absence of Buhari. Meanwhile, spin-doctors and political manipulators, in their different shades, have joined the debate, mostly on cyberspace. In some cases, the issue is coloured in sectional sentiments, political undertones and religious undercurrents.

In fact, there have been gossips on the motives behind recent fasting by some Christians in the South as well as speculations on massive prayers by some Muslims in the North over the ill-health of the president. Some scenarios are disturbing, as some comments attempt to create rift between Buhari and Osinbajo who have so far shown maturity, sincerity and respect in their mutual relationship.

President Buhari does not only trust Osinbajo, he assigns the law professor and church pastor to oversee the economic sector as the Head of the Economic Team. In fact, sensitive offices and strategic positions within that sector including the Chief Economic Adviser are domiciled under the Office of the Vice President. In more than two occasions, President Buhari has officially, through legislative mandates, handed over power to Osinbajo to act as Nigerian President.

Aside from the recent controversial and illegal disengagement of a female chartered accountant, Mrs Maryam Danna Mohammed from Niger Delta Power Holding Company (NDPHC) and the replacement of the boss of the agency with an aide of the Vice President, Professor Osinbajo has demonstrated, to some extent, unquestionable loyalty to President Buhari in his utterances and actions. A politically conscious person, Osinbajo has not behaved otherwise. As a legal luminary, acting President Osinbajo knows the implication of wilful disobedience to court orders by Buhari’s administration, especially on several bails granted to some personalities who are still being detained illegally, he nevertheless refused to act or intervene professionally on the legal dilemmas probably to prove his absolute loyalty to the administration. In tandem with the style and language of his boss, Pastor Osinbajo has consistently re-echoed the message of the administration on war on terror and the aggressive rhetoric on the anti-corruption campaigns.

As a loyal public officer, Osinbajo has embarked on local tours and hosted several meetings towards addressing seeming economic and socio-political challenges. The deliberate efforts, in the absence of the president, have so far strengthened local currency, the Naira, boosted oil production and stabilise the polity. In most occasions, he insists that he is a representative of the president. For instance, when he travelled to the heart of Niger Delta to appeal against militancy, Osinbajo said he was there as an emissary of Buhari to offer “a new vision” for the oil-producing region.

There is all certainty that Professor Osinbajo would have sought the consent of his boss and/or members of the Federal Executive Council in taking some of the far-reaching decisions which are being commended. We should therefore encourage the administration to be focused without creating a division between Buhari and Osinbajo while making comparison.

It is always painful any insinuation that questions the loyalty of a subordinate and doubts the strength and competence of the boss. Such a dilemma merely creates feeling of betrayal and instigates a crisis of confidence that can distract and derail a focused administration. In our clime, there is a thin line between sanity and insanity among political fans (fanatics) whose supports are based on ethnic, religious and sectional sentiments.

We should therefore, support the brilliant strides of acting President Osinbajo in sustaining the tempo of progressiveness and pray for the safe return of President Buhari to carry on the task of greater nationhood.