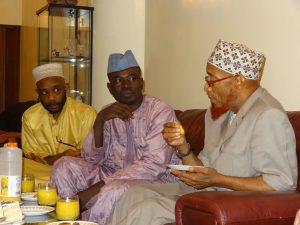 By Yushau Shuaib
During the last period of Ramadan fasting, a text message was widely circulated, inviting the public, especially Muslims to a lecture by the internationally-renowned African-American Muslim scholar, Shaikh Khalid Yasin on “Peaceful Coexistence among Muslims and Non-Muslims.” Venue was the International Conference Centre, Abuja and ticket was sold for two thousand naira.

Though this writer could not attend due to pressing engagements outside Abuja, reports indicated that the venue was jam-packed not only by Muslims, who paid for their tickets but also Christians who were admitted free of charge. The money raised from ticket sales and donations at the venue was according to the organizers (Muslimah Foundation and Light of the Ummah) were intended for developmental projects to assist the less-privileged.

Sheikh Khalid Yasin, who is the leader of Purpose of Life Foundation and Purpose Media Group also visited Lagos and Osun states, where he addressed thousands of faithfuls. Having watched and listened to some of his videos and audio materials, I regretted missing the opportunity of watching the charismatic lecturer who believes strongly in religious tolerance and peaceful coexistence among adherents of different faiths and creeds live.

Providence however, intervened a week later when I had the rare opportunity of meeting Sheik Yasin while on tour of United Arab Emirates (UAE). I had been invited as resource person at a Dubai PR programme organized by Zenith Professional Training. The charismatic speaker was coincidentally also on tour of Sharjah. One of the facilitators of the PR programme, Abdul Rashid, who is a friend of Khalid Yasin promised to introduce us.

In company of my wife, I was driven to Sharjah to meet Sheik Khalid Yasin. He is not only charismatic, but eloquent and simply humble. We shared a dinner, had breakfast together and attended the naming of a child named after him by one of his fans in Sharjah.

Sheik Yasin is not just a religious scholar; he is a motivational speaker who is very mindful of his topic and his target audience. He is articulate and sincere but careful never to hurt the feelings of his audience, whether Muslims or non-Muslims. From our close interactions and discussions, one could see an advocate who strongly believes that Muslims and Christians should embrace tolerance and brotherliness saying both faiths are connected.

He attributed the communal clashes and sectional attacks in Nigeria to intolerance and vengeance. He said religious zealots from both sides conspired against innocent men, women and children. Anger and vengeance, according to him, have poisoned the air so that all human life and dignity have been marginalized and compromised. He noted that fanatics abound in every facets of life but that leaders and followers must ensure they contain the excesses of such elements through public enlightment, dialogues and economic empowerment. He admonished that where dialogue fails, it could be necessary to identify the extremists among religious followers and expose them for what they are.

According to him, Christians and Muslims in Africa were living together in peace and harmony for centuries before the arrival of conspirators and dirty politicians who deliberately created enmity and hatred among people of different faiths, tribes and regions for their selfish gains.

Though a religious leader, it was clear that Sheik Yasin is greatly concerned about happenings in developing countries. He expressed alarmed about insecurity, poverty and disease ravaging some African countries. He talked very passionately about Nigeria’s potentials and greatness through its abundant human and material resources that are not being harnessed.

He therefore, called on African leaders to give priority to education, agriculture and industrialization yo galvanize economic development and job security. He urged governments to invest in youth development and make a huge investment in skill acquisition for self-reliance. He also enjoined Muslims to take the advantages of modernization, to take active part in professional training such as engineering, medicine, architecture, law among others in deliberate efforts to be relevant in global politics.

Concerned about the crisis in the Arab world, the African-American lamented the propensity of western-media to twist their editorial contents to make it appear that the crisis is religious whereas most of the issues are political, tribal and economic, which have nothing to do with Islam as a religion or Muslims.

On information technology, he pointed out that there is nothing wrong with social media if parents and guardians closely monitor their wards against evil and negative influences on some of the platforms. He therefore implored guardians to actively engage the youths on the ethics of society, morality and spirituality.

Sheikh Khalid Yasin is an American who, though proud of his nation, expressed reservations about the qualities of some of its leaders. He is an outspoken lecturer on contemporary topics including global politics, youth empowerment, gender issues and economic development in the context of Islam. Born a Christian in New York City, USA, Yasin embraced Islam in 1965 and has dedicated the last thirty-five years of his life debunking misconceptions about Islam and Muslims through diplomatic approaches and respect to the feeling of his audience. Through those tactics, he has won thousands of converts in different nations. He is due to be in Nigeria again to engage youths and women on their potentials.